For the first time, work by emerging artists was auctioned

It was organized at Banco Ciudad. Out of more than 70 lots, two-thirds were sold.

Tagged as: Banco Ciudad cultura Profundo, creative, dynamic”, harangue the auctioneer. Three adjectives to motivate a room that responds with laziness to the plastic works reproduced by plasma TVs and that are offered, one after the other, as “good future investments” of emerging artists that, it is assumed, will make tomorrow more than what is spent today.

The scene takes place in the Santa María de los Buenos Ayres Auditorium, at the Esmeralda branch of Banco Ciudad. For the first time, a public auction of works by emerging artists from the local plastic art scene was organized, and in this way they find their opportunity to make their way into the gallery circuit and enter the famous “market”, that elusive space where silent battles for recognition are fought.

“What is emerging is not defined by the age of the artists, but by those novel aesthetic proposals, of plastics without space in the traditional galleries and that, in general, are still in full learning”, defines Cristina Alonso, head of Art of the bank and one of those who made the selection of works to be finished.

The room is not crowded, but more than fifty people are watching the works and smiling with the efforts that the auctioneer Ricardo Vitaliti makes to catch buyers. At first, the works do not arouse much interest, but it is enough for one of the attendees to raise his hand in bidding, so that a small price escalation is triggered: the mechanism of the market operating in the open.

The selection of the works to be auctioned is the responsibility of the bank, but they rely on recommendations from galleries, private collectors and established artists. Two of them, Duillo Pierri and Maggie de Koenisgberg, accompany the students they recommended to the auction, who are now making their debut in the business of selling their creativity.

The aesthetic languages of the auction are multiple and range from the figurative to the geometric and expressionism. Most of the buyers are “young collectors with a mentality, with the capacity to discover what is not yet positioned in the market,” says Alonso.

For the bank’s press secretary, Jorge Velásquez, the experience was encouraging. “For a large auction, with more than 70 lots, two thirds have been sold, with values that doubled or tripled the base,” he says. And he promises to repeat, extending the call to students from universities and art schools who want to make their debut in the market. 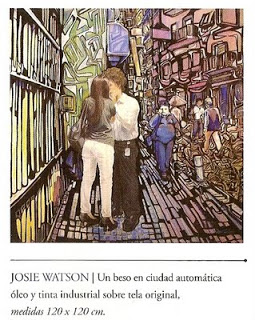