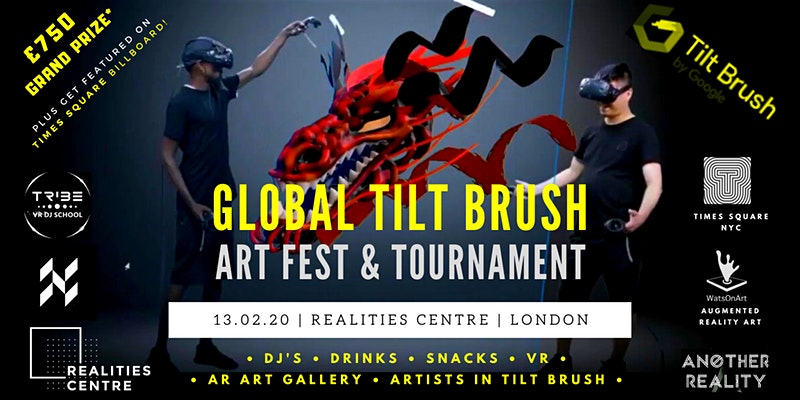 On the 13th of February 2020 WatsOnArt presented “Automatic City”, an interactive expression of the city of Buenos Aires that could be enhanced with Augmented Reality through WatsOnArt´s app, adding more fun to the VR scene of the Tilt Brush Global Contest & Art Fest organized by the Realities Centre at the Huckletree space in Whitecity. The Venue gathered VR artists and specialists through the day who where compiting digitally for an outstanding first price. During the event Josie Watson presented WatsOnArt to the public and everyone enjoyed travelling to Buenos Aires through her art. Have a look on the video!

WatsOnArt’s goals are fantastic: “I am working on WatsOnArt to become an open platform for artists, solving many problems technology is not yet having in mind for this market, and at the same time a sponsor line to create paintings inspired in new cities of the world starting with London and Berlin in 2020. My time in London started with a 5 days visit and extended to 6 months. Coming here is always amazing. London understands art as differentiation makes our products unique, impressive and long lasting in people´s memories. I look forward the network I am managing here and in Berlin for this production. I am really excited about this event and the opportunity to collaborate with the Realities Centre!”. Josie Watson, Founder and Director. The artist got confirmed two oncoming exhibitions for 2021 that will include this cities in her interactive art project. “Having London and Berlin as muses is something I dreamed all my life, I am really looking forward to it”.

Josie Watson, a renowned painter of Argentina, started in 2017 with some casual research on interactive installations developing an itinerant exhibition for Banco Ciudad, the official Bank of the city of Buenos Aires. For this, she directed a team of artists and programmers and received a public fund and the banks sponsorship. This first experience made her understand the massive impact of art fusion with technology in service of culture and founded WatsOnArt. Since then she has been using her real case of production to analyse the process of AR implementation in real installation and interactive art exhibitions. As a millennial, savvy for solutions, she created a business plan and is working on a platform that gives solutions to artists and art to people at accessible prices. With features as AR/VR, online shop, B2B integration and more. WatsOnArt aims to be the main platform for this new art genre: IT Art, how Josie Watson calls the new digital era cultural identity.

You can either spectate or take part.

Google’s Tilt Brush app has been the cornerstone of virtual reality (VR) artistic expression since its launch in 2016, allowing artists both amateur and professional to paint in three dimensions. Many competitors have arrived over the years but Tilt Brush still remains a firm favourite which is why the Realities Centre in London is hosting the UK leg of the Global Tilt Brush Art Fest and Tournament taking place next month.

The event is for artists and VR fans alike, a community get together involving food, music and some friendly competition. For those actually participating they will be able to compete to make the most immersive VR art environment, having 45 minutes each. To add a party vibe to the proceedings a live DJ will be broadcasting via Twitch entirely in VR powered by TribeXR.

London is the flagship event for the 2020 Global Tilt Brush Art Fest and Tournament which currently takes place in eight cities worldwide: Toronto, Boston, New York City, Vancouver, London (Canada), San Francisco, and Los Angeles. The cities have their own local participants competing for prizes based on their artwork, with local and then two grand prize winners for the Another Reality ARtist Award, and Another Reality Best New ARtist Award.

Prizes up for grabs include being featured on a Times Square Billboard, £750 ($1000 USD) and an all-expense paid trip to an AWE conference in either Santa Clara, Tel-Aviv, Munich, or Shenzhen, winners choice. Further prizes are due to be announced over the coming weeks.

The Global Tilt Brush Art Fest and Tournament will be taking place on Thursday, 13th February at Realities Centre London, from 12pm – 9pm GMT. Spectator tickets are available for £3 GBP, the All-Access pass allowing you to compete costs £17.

For further details on the event head to the official Eventbrite page, and keep reading VRFocus as further updates are announced.